Is there a sizzle missing from your holiday cooking?  Dreading sweating it out in a crowded kitchen with everyone watching you? When you ask “How’s the turkey?”, do you sense your guests are lying to you when they say “pretty good!”? If last year’s Thanksgiving meal was anything less than the best meal you’ve ever had, then it’s time to make the switch to “the most versatile cooking device ever” and get yourself a Big Green Egg at Pools of Fun. 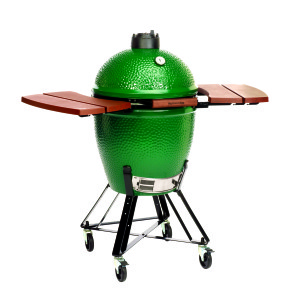 We offer an exceptional line of cooking options for your backyard, including Pappy’s Campfire Cooker, Louisiana Grill, and Traeger Grills. As traditional oven based Thanksgiving falls out of fashion give the Big Green Egg a chance this holiday season. You’ll probably get a few high fives before the tryptophan kicks in!

How does the Egg work?

With a hint of mystery as to what The Big Green Egg REALLY is (A smoker? An oven? A grill?), the bottom line is this tool is a marvel in versatility and should be celebrated as such. By using natural lump charcoal, fresh air enters the bottom of the egg then exits after flowing around an air-tight ceramic cooking chamber that traps in heat.

The advantages to using the Big Green Egg are that your food tastes better! You are able to control the temperature in your egg much easier than on a standard grill. Also, the food cooks more evenly because of the ceramic oven, rather than skewering it over a fire pit. The Big Green Egg is safer, because ceramic doesn’t get as hot as a standard metal grill. It’s a spectacle in and of itself. You’ll never forget the first time you try food out of the egg!

Because of the natural hickory and oak charcoal, you’ll take your turkey up a notch this Thanksgiving by using the egg. If you’ve never tried smoked turkey, you’re missing out! Consider basting it with buffalo sauce for some extra flavor. Because of it’s patented design, vegetables, potatoes, mac n’ cheese are all in the realm of possibility. Don’t be bashful, the Big Green Egg can make whatever you need happen.

Come into one of our five Indianapolis locations to see what we have to offer. We want to get as many of these off the shelves before the holidays, and would love for you to come on by and check out the Big Green Egg!